Newness, a startup co-founded by former Twitch employees, has raised $3.5 million in a Sequoia-led seed round for its live-streaming platform aimed at beauty creators and their fan communities. Though today’s creators are not without options when it comes to livestreaming — Twitch, YouTube, TikTok, Instagram and Facebook are all popular choices — Newness is focused on building differentiated tools and features that work well for the beauty streamer market in particular. This includes offering options for both public and private streams, engagement mechanisms that reward positive contributions, moderation features and the ability for fans to earn access to free beauty products by community participation.

The idea for Newness comes from CEO Jenny Qian, an early Twitch employee who held a number of roles at the game-streaming site over the years, most recently as the senior director of Business Strategy for Twitch’s video platform. She’s joined by CTO Youri Park, who also previously worked at Twitch, as well as Blizzard and Facebook Gaming.

Though always an avid gamer herself, Qian says she began getting into skincare after she turned 30. She then soon realized the potential in the livestreaming beauty space.

“I was so used to the format from Twitch. And, in some ways, I feel like I was spoiled with livestreaming,” she explains. Being able to hang out with streamers, ask questions and learn from them was something that made the live format so compelling, she believes. 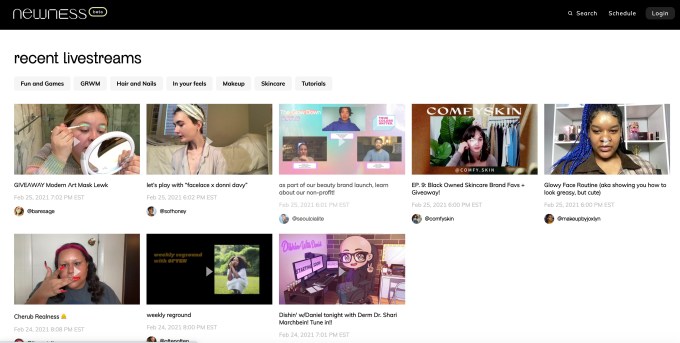 “It made me scratch my head and think: Why didn’t something like this exist for the beauty community? It’s a community that is just as passionate, if not more so … and it’s a content category that is so incredibly popular. How come there isn’t a live medium available?” she wondered.

But at the same time, Qian admits she didn’t feel comfortable going live on Twitch.

“It’s one thing to be made fun of for my gameplay. But I think it’s another if I take my makeup off and people are making fun of me for how I look. It just cuts to a whole new level,” she says.

With Newness, the goal is to create a sort of anti-Twitch, in a way. It aspires to be a wholesome, positive community for beauty creators and fans, where moderation is a key focus and fans get rewarded for quality participation, not trolling.

When creators go live, Newness will pair them with an in-house moderator to help them feel more comfortable and to keep the content flowing. Once they’re a more established streamer, Newness will work with the creator to locate and elevate a moderator from their own fan community to help out with future streams.

Meanwhile, fans are awarded virtual items called crystals for positive participation and good behavior — for example, for watching your favorite stream and engaging in chat. In Newness, every chat message also has a little heart next to it. And the more hearts you earn over time for higher-quality comments, the more crystals you also earn. 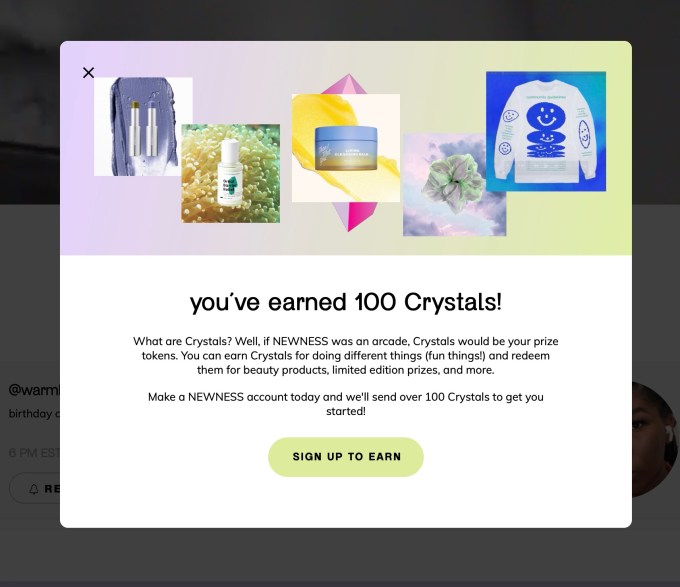 These crystals can be redeemed for full-size beauty products, which Newness will source through brand deals. Because moderators spend more time on the platform, they’ll also earn more crystals — and that means more opportunities for products.

The positive reward system has so far proven successful during beta tests, as around 66% of Newness viewers, on average, end up chatting during live streams, Qian says.

Another differentiating feature for Newness is the ability for creators to host both public and private streams. The latter is not meant to be some sort of OnlyFans equivalent, but is instead focused on allowing creators to host more professional and exclusive live events. With private streams, creators can sell both general admission and even pricier VIP tickets that could come with some sort of reward — like a goodie bag of beauty supplies.

Eventually, the startup plans to take a share of the revenue these transactions generate, but it hasn’t yet rolled that out as it’s still beta testing. 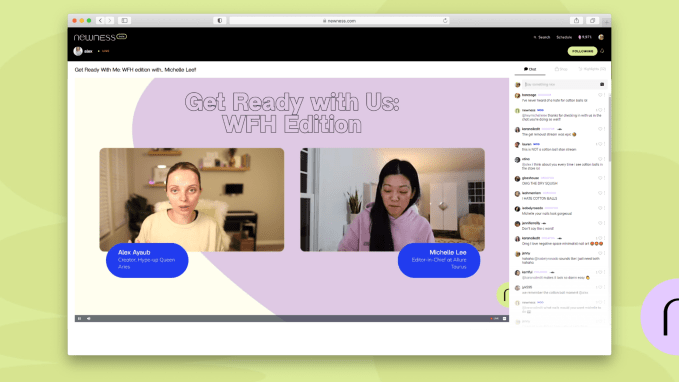 At present, the Newness community is small. And it still chooses which creators are allowed to livestream.

“We handpick the creators that we let on to our platform and keep it invite-only because we want to make sure that our earliest creators are helping to set the tone and building the culture of the community,” she says. The startup wants to ensure there are enough community members to sustain itself, while also not allowing the community to become toxic as it scales.

“We really care about cultivating an incredibly wholesome community. So for us, safety, moderation — all that is really important to us,” Qian notes.

The creators produce a range of content, including more expert advice and product reviews to more casual “get ready with me” videos and vlogs.

The startup has been in beta testing since last year and is only available on the web for the time being. With the seed funding, Newness expects to build out its iOS consumer app in 2021, to complement its dedicated streaming app for creators. (Creators can also opt to stream from their DSLRs, if they prefer.)

It also aims to hire engineering talent and build out its 14-person team that’s now spread out across San Francisco, New York (thanks to some ex-Glossier hires), and L.A.